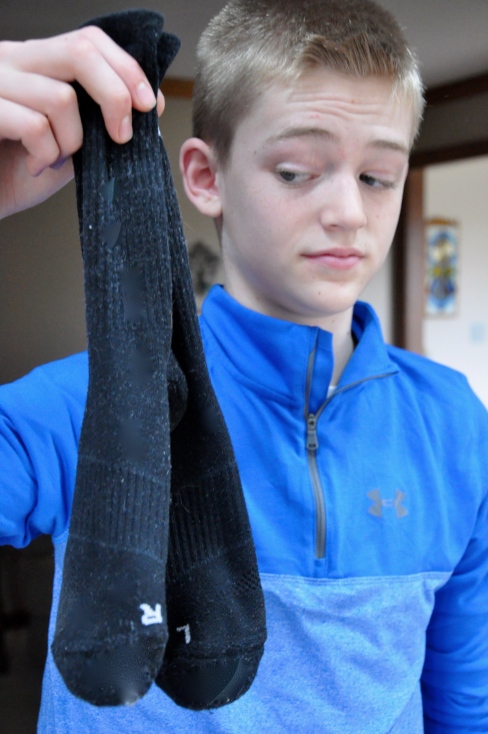 I’m not sure if it’s a blessing, or a curse. Maybe it’s both.

I’ll just come straight out and say it. I have an unusually good sense of smell.

I hate to brag. But, yes. I’ve got a good sniffer.

Case in point, I have called the city gas company on several occasions alerting them of a specific address or intersection where I smell a potential gas leak. Do you know how many of those times I have later seen a crew repairing said gas leaks in the exact spot that I’ve reported? Every single time. I’m not saying the city should hire me as a “gas sniffing unit” just yet, but they might want to keep the idea in the back of their minds.

Anyway, this sense of smell can come in handy, but it can also lead to suffering. Suffering in the form of extreme awareness of foul odors.

And let me tell you, I have I met some foul odors in my day. But just this past weekend, I experienced a new level of one particularly rancid odor.

And it wasn’t it a gas leak.

It was my son’s socks.

Granted, the poor kid has been hearing complaints from me for years about his socks. They’ve never smelled like roses. In fact, roses are probably now offended that I even dared make the comparison. Please forgive me.

Anyway, one time, in a hotel room, our family decided to put Karson’s socks and shoes in the hallway overnight because none of us could stand the odor with them in the room. We figured if anyone dare steal them, then bless their hearts. And noses. We’d buy new ones. But, his socks and shoes were there in the hallway the next morning, and my son’s pride remained in tact. Karson owns up to it. He’s just thirteen, but he’s a true man when it comes to owning his stinky feet. He’s not ashamed.

So, this past weekend, my husband and I “divided and conquered” with the kids. I took two of the kids to Michigan for my son’s basketball team to play in a tournament, and my husband stayed home to coach our third child’s game. We all had fun. It was a wonderful weekend of friends and basketball, and my son’s team got to play in seven basketball games over the course of two days. And bonus, they won them all! What great memories!

But here’s the problem. Minutes after getting into our van to drive the two hours home Sunday evening, I smelled trouble. I did not even have to turn around to verify my suspicion. Karson had taken his shoes off.

And I was about to pass out.

And then I find out why it’s this bad. This whole new level of awful. This “my eyes are burning” odor that is now assaulting me from the back seat.

He wore the same socks for all seven basketball games.

Yeah. You heard me. All seven basketball games. Same pair of socks. No washing machine. No spray deodorizer. No “airing them out outside.”

“Karson. Something has to happen right now with your socks. I can not make it the rest of the way home in this condition. This situation is not going to work.”

I continue. “I don’t care if you like those socks or that they’re Under Armor socks. Do we need to pull over and throw them away?”

“Hmm.” Karson thinks. Karson shrugs. Karson barely notices the odor and doesn’t understand why wearing socks seven games in a row without washing them is bad.

I exhale and reload.

“Okay,” I add. “I have an idea. Why don’t we find a bag and you can put your socks in it and wrap them up SUPER tight to try and stifle the odor.”

Karson thinks. Karson shrugs. Karson slowly wraps the socks of death in a trash bag that we miraculously found in the van.

And we made it home.

Who knows, we may have passed several gas leaks on our way and I was not able to sniff them out and call them in because of the sock situation.  I guess I may never know.

But this I do know.

And they don’t care.

But, if you can hold your breath for awhile, and remember how much you love them, stink and all, you’re in for a great ride!

2 thoughts on “Assault with a deadly pair of socks.”