My daughter had been watching me and was disappointed in my reaction. She had been hoping to witness a little drama and excitement… and possibly tears. But there were no tears involved. Instead I was quite stoic and the emotions of my face were of self-pride and relief. I had just performed a minor surgery on myself and had been successful. 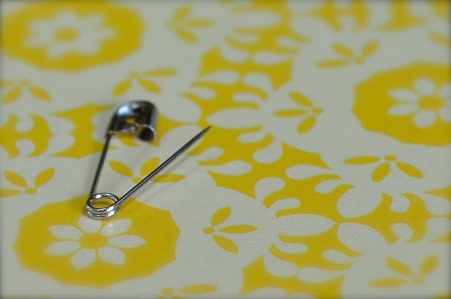 The term “surgery” may be a little excessive. Maybe what I did was called a “procedure” when I dropped the safety pin into a pot of boiling water and then later pried it open to expose its cooled-off needle tip. I had taken that makeshift medical instrument and had dug it into the palm of my hand to free the splinter that had been wedged inside my skin for five days.

When the splinter was finally released from its fleshy prison I held it out on the tip of my finger and stared at it.

I could barely even see the tiny piece of rose bush that had been figuratively and literally a thorn in my flesh.

Five days earlier I had been trimming our rose bushes and the result had been better looking landscaping, but forearms that looked like I had been in a fight with a cat. And lost.

I knew I had gotten a few thorns stuck in my skin and I spent a minute or two extracting them. It wasn’t a big deal except for one stubborn thorn in my palm that just wouldn’t budge. I really didn’t give it much thought after a few attempts. I figured it would work its way out eventually and at least my rosebushes were free of its burden.

The days passed and I half-heartedly and periodically would try in vain to remove the little thorn. By day five I realized that my entire hand was beginning to hurt. I was having trouble grabbling onto things and since I’m right-handed I was constantly being reminded that it was painful to touch anything against my palm. The skin around the splinter was red and puffy and actually beginning to look infected.

It was time for this safety pin physician to heal thyself.

And so it had come to this post-op moment, my daughter walking away shrugging and bored and me holding a tiny thorn on my fingertip in the sunlight coming in from the kitchen window.

How could something so small have caused such pain?

The pus that oozed from my palm indicated that my body had been fighting this miniature enemy. It was a foreign object. It had not belonged in my skin and my body had rejected it.

I disposed of my surgical instrument and carefully washed my hands and squeezed some antibacterial goo onto my palm. A couple of Band-Aids were soon in place and I released myself to go back to all normal activity.

The tiny perpetrator was long gone and could do no more harm.

But I have other thorns.

They’re not literal, but they cause just as much pain, if not more. They stem not from a bush, but from fear. They cling to my flesh as worry and anxiety.

I hate what they do to me.

The worry often starts so small and I label it is “concern” or “wise discernment” rather than seeing it for what it truly is.

“This worry is microscopic,” I think to myself, “What harm could it cause me to carry it around for awhile?”

And then it festers.

I half-heartedly and periodically tell myself that I should stop worrying. I should let it go and trust God. I should pray about it and remember that the Bible says “Do not worry.” But often my attempts at removing it are in vain.

Finally, I come to a point where I must make a decision. Will I leave the thorn of worry in my flesh and allow the infection to win? Or will I put some water on the stove and bring it to a boil in preparation for some surgery?

Either way it hurts. That’s the nature of a thorn in one’s flesh. But when I take the time and make the effort to get rid of the worry—that nasty enemy to my soul, then the healing process begins. When the perpetrator is gone, it can do no more harm.

And I know my Father who watches over me will be pleased with my reaction, because I have replaced a thorn in my flesh with not a Band-Aid, but with trust in The Great Physician.