I’ll never forget what she said. She stood behind the simple podium telling a room full of young moms the heartbreaking story of her infant daughter’s death. My throat felt tight and many eyes twinkled with tears as she told our MOPS (Mothers of Preschoolers) group the details of her unimaginable loss. But it was one statement in particular that hit me. And it stuck. Though it has been years since that morning, I have replayed her words in my head often, as if she said them just last week.

“This may sound strange, but now that we have other children and I try every day to protect them from this world and to raise them right, there are times when I’m thankful that the daughter that we lost is already safe. Nothing can harm her now. She’s with the Heavenly Father, and she’s safe.”

Her transparency is capable of encouraging many others to live with such a perspective. Her worldview is an eternal one. Her hope is not rooted on Earth, but in Heaven. Her trust is in an invisible and loving God.

Though she has lost the most precious thing, she has nothing to lose. 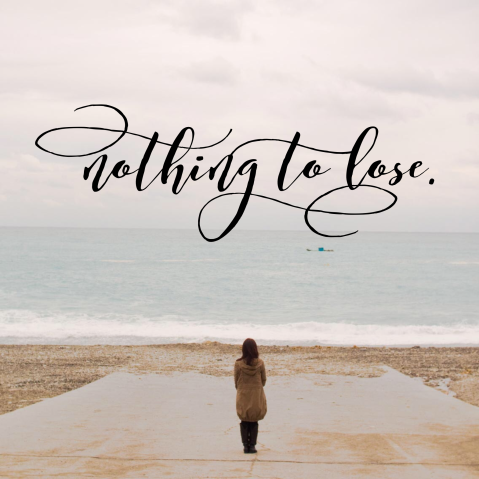 I know for a fact that this woman would have rather not faced her horrific pain in order to gain such a mature and godly perspective. But we don’t always have a choice in our life lesson plan. We do however have a choice in how we’ll accept it.

And her words remind me to accept an eternal perspective.

That with our Heavenly Father’s love and the gift of hope He offers, we have everything to gain.

And when we rest in the Truth, we have nothing to lose.

This post of a part of the Five Minute Friday community where a group of bloggers write for about 5 minutes about a topic based on a one-word prompt. To see other posts from this week you can click here: http://katemotaung.com/2016/06/16/five-minute-friday-lose/

One thought on “Nothing to Lose.”