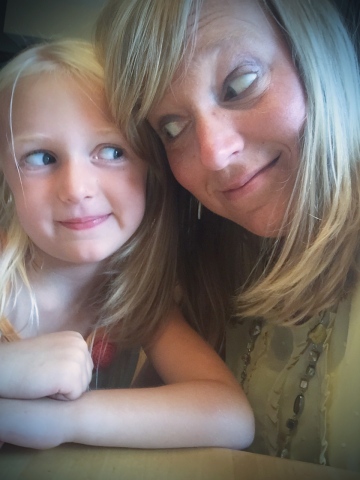 The lobby of the dorm where we’d been staying as a family during the summer camp my husband was directing was loud and crowded.

Teenagers laughed and chatted in little groups as they played cards, took selfies, and ate the ice cream sandwiches provided as the official late night snack before the mandatory “lights out” in a few minutes.

My own children, too young to be campers themselves, we’re having a hay day staying up past their bedtimes and playing with the “cool kids.” My ten-year-old son was being trained in how to make the best paper airplane. My six-year-old daughter was following a group of teen girls around like a baby duckling following its mama, and my youngest child, five-year-old Kenzie, was sitting across the room from me.

I focused in on Kenzie.

She sat on a little bench next to a woman she’d just met two days before, the camp nurse. I had just met this woman as well and had enjoyed the few conversations we’d had. Now as I watched Kenzie from across the noisy lobby I was intrigued. Kenzie, who is normally quiet around people she doesn’t know well, looked as if she had launched into an animated dialogue. Her little mouth and hands were both moving rapidly, though I couldn’t hear anything she was saying. I was curious to know what she was sharing with such gusto.

I had some guesses.

She was probably telling her new friend all about our fun summer as a family. How we’d been to the lake for vacation, traveled to a State Park, and had gone to Pennsylvania to visit family on what she thought was an adventure in the mountains. We had enjoyed so much time together this summer, the five of us, playing cards and swimming and laughing. I couldn’t wait to hear what highlights Kenzie had shared.

I threw away the empty ice cream sandwich boxes and made my way through the adolescent mob to Kenzie and the nurse.

“I don’t know what all Kenzie has been telling you, but it sure looked like you’ve been having quite the conversation over here!”

The kind woman shook her head. I waited with a smile on my face to hear which wonderful family memory Kenzie had let her in on.

“Kenzie was just telling me that you have so much work to do, that you sometimes can’t even play Barbies with her.”

The smile on my face slowly allowed gravity to pull it downward.

It took me a moment to grab onto this new train of thought and pull myself up into the rattling freight car that was whizzing down a completely different track than I was expecting.

And though I hadn’t expected to be on this train, I certainly recognized it. I knew where it was headed.

All Aboard, folks, we’re on the fast track to Guilt Town. Mayor Mommy Guilt presiding.

I fumbled around with a few sentences saying something about the things kids say and then I sat down on the bench and changed the subject. Suddenly I felt the need to intensely watch the paper airplane seminar happening a few feet away from us.

I wanted the planes to distract me from the crazy train of thought I was trying to disembark.

I have so much work to do?

I sometimes don’t play Barbies with her?

Did she even tell her that sometimes I DO play Barbies with her?

Did she happen to mention that I’m a stay-at-home Mom and I don’t even GO to work?

Apparently my ticket to Guilt Town had indeed been punched.

I didn’t know if I WAS guilty, but I FELT it alright.

And believe me, with the title of “parent” a new skill set arrived. I can feel emotions at a whole new level. The rheostat has been cranked to the max and my emotions are blaring. Each noisy one seems to bring its ugly, uninvited opposite second-cousin once removed.

For example, Elation shows up over chubby feet taking first steps and no sooner does it make itself comfortable, than Worry pushes through the door.

Joy seizes me as I watch a sweet face blow out birthday candles, but I suddenly find myself in the grip of Sadness as I realize that time is moving too quickly for me to savor.

Anticipation fills my mind as I send my child off to school, but soon Doubt waves its arms above its head trying to distract me from enjoying the moment.

Yes, I’ve had a lot of feelings as a Mom. I’ve been all over the map. But I have to say that after frequenting many stops, I think I despise Guilt Town and its Mayor, “Mommy Guilt,” the most.

I’d like to take that Mommy Guilt and ram my knee into her gut and then strangle her with my bare hands and roll her out to the curb.

And I’m not even a violent person.

Mommy Guilt likes to sneak up behind me and whisper things in my ear that cause me to doubt myself and what I know to be true. She can only focus on the negative. The lies. The doubts. The loss.

And I’m sick of her.

The paper airplane sailed in front of me derailing my train of thought.

I’ve got to get off this train. And not just now, but for good.

And it seems to me that the best way to avoid a ride to Guilt Town is to intentionally go in another direction. Toward the truth.

I need to focus on what I know to be true.

Sometimes I don’t play Barbies with my five-year-old.

I’m not perfect. I make mistakes. I fail. I wish for do-overs.

But I’m a mom. I know I don’t do everything right, but I also know I take care of my children. I hug them, snuggle them, discipline them, clothe them, feed them, play with them, teach them, laugh with them and most of all, I love them fiercely.

That’s what I know to be true.

So I think Mayor Mommy Guilt best be working on her resume, because as far as I’m concerned, her term as Mayor of Guilt Town is up.

One thought on “My Summer (Guilt) Trip”